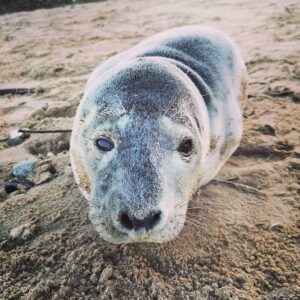 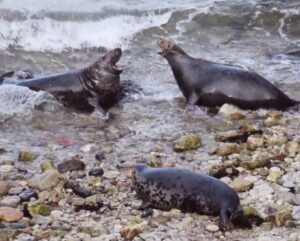 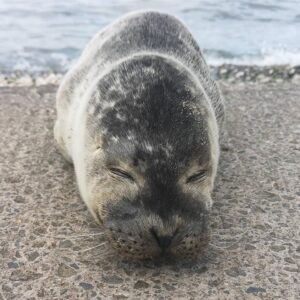 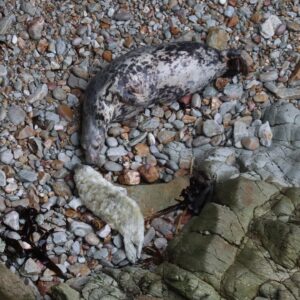 Seals belong to the taxonomic group known as Pinnipeds. Pinnipeds can be further broken down into three separate families: the true or earless seals (Phocidae), the eared seals (Otariidae), and the walrus (Odobenidae). Grey seals and Harbour seals are both members of the Phocidae family and represent the two most abundant species of pinniped found along the coasts of the UK, however five vagrant species: The Harp Seal, Hooded Seal, Walrus, Ringed Seal, and Bearded Seal are occasionally sighted in Britain and Europe at the southern extremes of their habitat range. Wales is known for its Grey seal populations but Harbour seals on the other hand are only occasionally sighted and are not thought to breed in Wales or permanently inhabit the coast.

Protected in Britain under the Conservation of Seals Act 1970. Also protected under the Wildlife (Northern Ireland) Order 1985 and the Marine (Scotland) Act 2010.

Grey Seals are known as Morlo Llwyd in welsh and their scientific name, Halichoerus grypus, roughly translates to mean ‘hook-nosed sea pig’ owed to the fact that they possess a roman nose profile giving them a more ‘dog-like’ appearance. They are further distinguishable from Harbour seals by their large parallel nostrils and much larger body size. Pups are born with a fluffy white fur coat (lanugo) which they will moult when they wean from their mothers at around 3-4 weeks of age. Adults possess intricate fur patterns (pelage) that can be used to identify individuals. Males are darker in appearance compared to females and often have battle scars from other males around their neck. Females also have a sleeker appearance and more gently sloping face in comparison to males.

Grey seals spend around two thirds of their time offshore hunting and foraging but return to land to digest their food, mate in the winter, rest, build up vital energy reserves, and to birth and feed their young. Pupping season commences in autumn with white fluffy pups being born along the coast in North Wales from September-December. Females are protective of their young and will stay close by, leaving their pup on land for short periods while they venture offshore but will retain a line of sight with their young throughout. Breeding season begins once pups have weaned and left their mothers at around 4 weeks old. During that time, pups will have tripled their birth weight and females will have used up the majority of her fat and energy reserves and needs to return to the sea to hunt, leaving the pups to learn to fend for themselves and allowing their natural instincts to kick in. The moulting season takes place February-April where seals may spend longer periods on land in order to moult their old fur and make way for new growth before the warmer summer months begin. Grey seals inhabit rocky shores and coastlines adjacent to tidal races and remote from human access.

Protected in Britain under the Conservation of Seals Act, 1970, and classified as a Priority Species under the UK Post-2010 Biodiversity Framework. Also protected under the Wildlife (Northern Ireland) Order, 1985.

Harbour Seals are known as Morlo Cyffredin in Welsh. The name Harbour seal came from their preference for resting in docks and harbours but they are also referred to as Common seals in a number of localised areas. They are much smaller than Grey seals and have a more snub nose exhibiting a rounder face and more ‘cat-like’ appearance. There is less obvious differences between the two sexes compared to grey seals so identifying sexes from observational distances can prove challenging. Pups are not born with a white fur coat (lanugo) like Grey seals and instead moult this before birth and are born with full pelage. In comparison to Greys, Harbour seals have smaller and obvious ‘V-shaped’ nostrils. The pelage of Harbour seals tends to be formed of smaller rings and spots differing to the large blotches and shapes of the Grey Seal. Identifying individuals therfore can also be challenging.

Harbour seals do not tend to form the large colonies seen by Grey seals and are often sighted alone as opposed to in groups. They are generally less vocal than Grey seals and research suggests Grey seals may predate on Harbour seals however, non aggressive interactions of Harbour seals in Grey haul out sites have been witnessed in North Wales over recent years. Pupping season is in the warmer summer months from June-August and tends to take place on offshore sandbanks with pups swimming within just a few hours of birth. Moult season takes place throughout August. 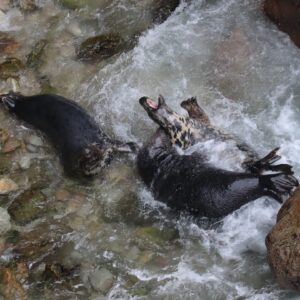 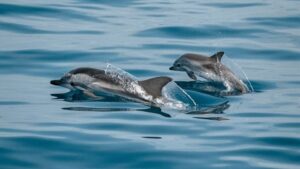 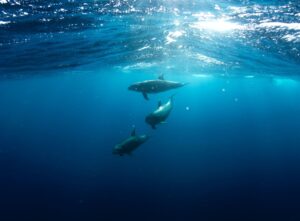 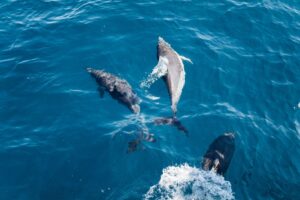 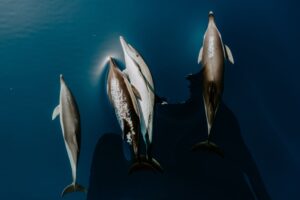 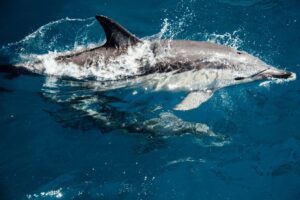 Whales, dolphins and porpoises are all grouped together under one taxonomic order known as Cetacea (commonly referred to as cetaceans). There are currently around 90 recognised species of Cetaceans found throughout the world, 30 of which have been sighted in our waters around the UK. Some species are less commonly sighted than others with around 14 species regularly recorded. The most frequently sighted species observed close to shore around North Wales are:

Protected in the UK under the Wildlife and Countryside Act 1981. Listed under CITES Appendix II and classified as a Priority Species under the UK Post-2010 Biodiversity Framework. Also protected under the Conservation Regulations (Northern Ireland) 1997.

This species is highly social and normally found in pods (groups) and are frequently found in the western English Channel, off south west England, Ireland and in the Irish Sea. The common dolphin is predominantly an oceanic species, however they can forage close to shorelines, and have been sighted off the coast of Anglesey.

Protected in the UK under the Wildlife and Countryside Act 1981, listed under CITES Appendix II and classified as a Priority Species under the UK Post-2010 Biodiversity Framework. Also protected under the Conservation (Natural Habitats, etc.) Regulations (Northern Ireland) 1995.

Arguably the most familiar and easily recognisable to dolphin enthusiasts. Bottlenose dolphin populations are common along coastlines bordering the Atlantic and Irish Sea, such as Cardigan Bay Wales, the Moray Firth in Scotland and in the Channel Islands. Smaller groups and individuals are seen all year round in North Wales. Bottlenose Dolphins are found throughout the world’s oceans, apart from at the poles.

Protected in the UK under the Wildlife and Countryside Act 1981, listed under CITES Appendix II and classified as a Priority Species under the UK Post-2010 Biodiversity Framework. Also protected under the Conservation (Natural Habitats, etc.) Regulations (Northern Ireland) 1996.

Risso’s are seen in the Irish Sea, particularly around North West Wales (Bardsey and North Anglesey), the west coast of Ireland, off the north and west coasts of Scotland, and South-west England. Preferring deeper waters, often found on the edge of continental shelves, however there are several places around the world where they are found much closer to shore such as Anglesey.

The Risso’s dolphin is also large and stocky in appearance, with a blunt head and no beak. Dark grey dorsally and on flanks, lightening with age to a light grey or even white. Throughout their life the underside will be a light grey or white. Heavy scarring and scratches are also seen with increasing age. Centrally placed tall, sickle shaped dorsal fin.

Protected in the UK under the Wildlife and Countryside Act 1981, listed under CITES Appendix II and classified as a Priority Species under the UK Post-2010 Biodiversity Framework. Also protected under the Conservation (Natural Habitats, etc.) Regulations (Northern Ireland) 1996.

How you can help

If you encounter cetaceans whilst at sea, please maintain a large distance and do not deliberately approach them, especially if calves are present. If they choose to approach you, maintain a constant speed and allow them to interact on their own terms and do not chase or follow them. If you find a stranded live cetacean please call BDMLR on 01825 765 546 and you can also report deceased cetaceans to Cetacean Strandings Investigation Programme (CSIP) via their website. 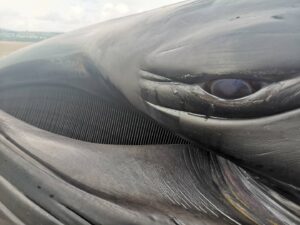 All distribution information is based on the UK populations (resident and transient),
not worldwide.

You can also help marine mammals along our coast by committing to support your local wildlife trust.

This website uses cookies to improve your experience while you navigate through the website. Out of these cookies, the cookies that are categorized as necessary are stored on your browser as they are essential for the working of basic functionalities of the website. We also use third-party cookies that help us analyze and understand how you use this website. These cookies will be stored in your browser only with your consent. You also have the option to opt-out of these cookies. But opting out of some of these cookies may have an effect on your browsing experience.
Necessary Always Enabled
Necessary cookies are absolutely essential for the website to function properly. This category only includes cookies that ensures basic functionalities and security features of the website. These cookies do not store any personal information.
Non-necessary
Any cookies that may not be particularly necessary for the website to function and is used specifically to collect user personal data via analytics, ads, other embedded contents are termed as non-necessary cookies. It is mandatory to procure user consent prior to running these cookies on your website.
SAVE & ACCEPT