The idea for North Wales Seal Research Organisation began over six years ago with a group of passionate undergraduate marine biologists at Bangor University in North Wales.

NWSRO founding members Gem and Stef, along with a small group of marine science students and Ben of SeaWatch Foundation and BIAZA, inherited the task of setting up the university’s first marine mammal society from their predecessors and set about the long journey of having it declared an official society, which was eventually achieved in 2015.

The society continued when handed over and enjoyed many successes, including numerous marine science conferences and student training courses in partnership with a number of marine mammal research organisations and charities. Soon an unofficial team was born when Stef and Gem began volunteering to carry out marine mammal surveys along the Anglesey coast with Ben, and all three continued gaining experience as marine mammal medics with British Divers Marine Life Rescue (BDMLR), a cause all felt committed to and strongly about even to this day. Since that time, all three have remained permanent fixtures in the North Wales marine mammal research and conservation community with a focus on native cetacean and pinniped species.

Over the years, Gem retained her roots in seal conservation and continued to dedicate herself to the plight of seals on the Welsh coast, both as a marine biologist and BDMLR medic, while Ben and Stef also continued to volunteer as BDMLR medics as well as working in whale and dolphin conservation and research. Collectively they now deliver successful BIAZA certified marine mammal survey training courses in the area and undertake their own research projects.

With increasing pollution and higher risk of threats to marine species, the need for a group dedicated to seal conservation in North Wales was becoming increasingly apparent and eventually an unorganised group evolved into the organisation we see today, with the invaluable help and guidance of our fellow seal organisations from around the coast of the UK.

During that time, two new trustees joined Gem, Stef, and Ben, bringing conservation and animal behaviour experience to the team. In addition, the team now comprises twelve amazingly passionate individuals with varying levels of experience, from a number of different sectors and backgrounds; some old friends and colleagues and some new as well as a devoted and experienced steering group and a growing network of hundreds of volunteers along the Welsh coast. Amongst the team exists decades of combined conservation, zoology, and marine science experience that we utilise throughout our seal projects to help ensure the best education and conservation outcomes. 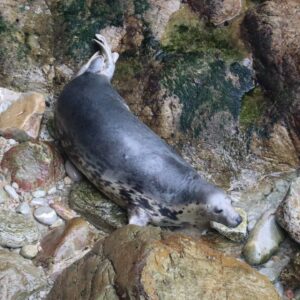 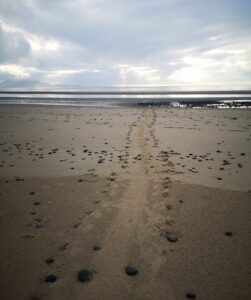 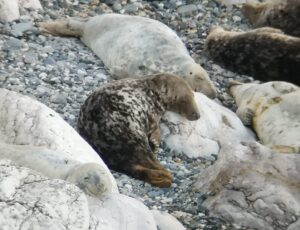 Kindness and collaboration is at the forefront of the NWSRO ethos.

We believe that a small group of people with big dreams working towards a common goal is enough to make change. Nature brings communities together and working with our local communities and stakeholders to ensure better awareness and conservation outcomes for seals in north wales is one of our main aims.

We encourage a passionate, inclusive, and kind attitude to both people and nature and love working with individuals from a variety of backgrounds with different levels of experience. We believe a ‘can do’ attitude and a willingness to learn and work in all weather conditions and environments are the only tools you need to make change.

As the NWSRO team like to say ‘Let’s make waves!’. If you wish to get involved and help make a difference remember that no task is too small or insignificant and real change always starts small. Please contact us or your local wildlife groups to find out how to help in local marine conservation projects. 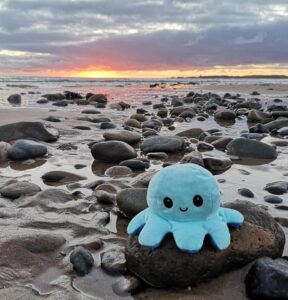 If you’d like to help support our work, you can do so right here on the site using our secure, one-off donation portal. Thank you!

This website uses cookies to improve your experience while you navigate through the website. Out of these cookies, the cookies that are categorized as necessary are stored on your browser as they are essential for the working of basic functionalities of the website. We also use third-party cookies that help us analyze and understand how you use this website. These cookies will be stored in your browser only with your consent. You also have the option to opt-out of these cookies. But opting out of some of these cookies may have an effect on your browsing experience.
Necessary Always Enabled
Necessary cookies are absolutely essential for the website to function properly. This category only includes cookies that ensures basic functionalities and security features of the website. These cookies do not store any personal information.
Non-necessary
Any cookies that may not be particularly necessary for the website to function and is used specifically to collect user personal data via analytics, ads, other embedded contents are termed as non-necessary cookies. It is mandatory to procure user consent prior to running these cookies on your website.
SAVE & ACCEPT